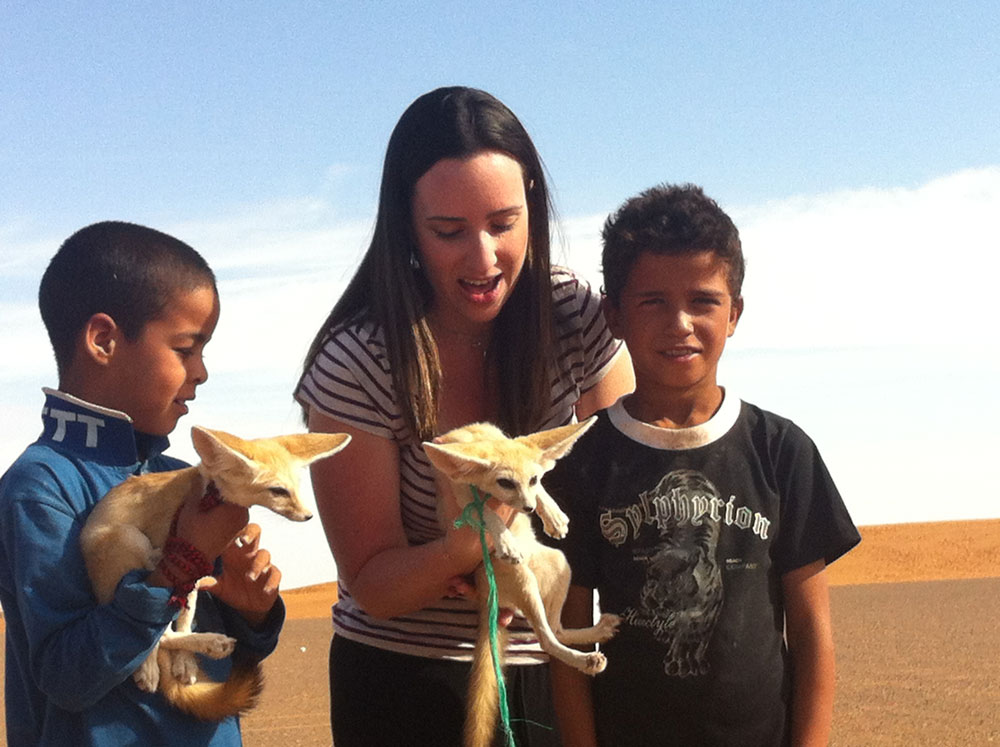 Child of the desert – The early years

My family was a fairly large nomadic Berber family.  There were my parents,  grandparents, aunts  uncles and cousins.  We all lived and traveled together moving about the desert with great regularity depending on available resources with our sheep and our camels herded before us..  We lived in tents made of camel hair by the Berber women which helped protect us from the heat, the cold, sandstorms and sometimes even rain.

Everyone had their role

The women would take turns leaving very early every morning, around 0400, while it was still cool.  They would ride their donkey to the river about 25km away.  While at the riverbed, they would search for wood which would be used for cooking and heat.  They would also collect fresh water and then walk back to the camp with the donkey carrying the load of wood.   The women who remained in the camp would cook and take care of the young children.  During the day, the men took the camels and sheep to forage for food and drink.   At the end of the day, after the animals were taken care of, the family gathered around a fire in a circle to celebrate the day.  We sat in the circle because all were considered equal.  We sang Berber songs which are all about life and played drums. First the men would sing and then the women would respond.  It was a very happy life.  We climbed the dunes and told stories about life, look at the stars and slept.  I played with the animals.  They were my friends.

The importance of family

Family was important and my grandfather was most important.  He never attended school but studied and taught himself Arabic; Berber being his native language.  The family had two tents; one was the kitchen and the other for family.  Family was my grandparents, my parents, nine aunts and my father’s brother.  We all helped each other.  As I said, the women took turns going to the river and the others staying in the camp to cook and care for the children.  The girls stayed with the women. The men and boys, once they were about four years old, also spent time searching for plants for tea, medicine, and for minerals in the deep holes left by the French in 1956.  Our moms taught us the Berber language.  Out fathers taught us by example, to be and do only good.  We did not do bad things because we had no bad example to follow

At night, I liked to go to my Grandmother and lay my head on her lap and fall asleep as she told me stories about her childhood experiences and her parents and her early nomadic life.  She talked about what it was like to travel when she was young.  I called my Grandmother “Mom” and my Grandfather “Daddy”.  My parents I called by their given names.  I was with my grandparents every day all day as a young child because my parents were out gathering wood and taking care of the animals.

I remember one day when I was a young boy, I gathered some milk, dates and water to help keep me full and took the camels to feed in the desert.  About midday, I looked up and saw, far away, a large sandstorm.  It was so large that my world turned black.  I felt lost.  I was afraid.  I was a small child.  I could not see one meter in front of me.  I gathered the camels and placed them in a circle with me in the center.  The storm lasted all afternoon and night.  In the morning when the storm finally passed, I discovered I was less than ½ km from our camp.

We had no calendar to record events.  So a birth or death could be recalled only as the day of the big rain and flooding.  Or perhaps the day the sky was dark from a sand storm.   Or any other natural event that happened the day you were born.

My family was the first to come to Merzouga, a new city where there was a large lake with plenty of water for our animals.  There was also a nice river.  A city that was perfect for people and animals.  We came because the family decided the children needed to go to school.  But one needed birth papers so the parents took me to Taous, the community government office.  I was given the birthdate of November 12, 1986 because that is the day I was first there.  If I had brothers and sisters who were there for the first time, it is likely that we would all have the same birthday.

I was bigger than the other children in school and knew that I was older than they were.  This is when my life changed!  I learned there were other languages besides Berber.  I studied Arabic for 2 years and then French for six years.  Arabic and Berber are very different in that one reads right to left and the other left to right.  Once I began studying in school, I found a great love of the world and life.  I knew then that I would help take care of the world because of my Berber upbringing.  As I began secondary school, I began to learn English.  My secondary school was in Risanni and it was necessary to live in a boarding home.  My father would come to visit on weekends and always offer me money.  Even though I could have used some, I always told him no, I was fine.

Merzouga is the home of the largest dunes in North Africa, the Erg Chebbi.  Berber legend says when a wealthy family refused hospitality to a poor woman and her son, God was offended and buried them under the mounds of sand.  I became excited to learn this and wanted to share with every one this information.  I wrote two books about the Berber culture, traditions, poems and poetry after interviewing not only family, but many others who shared their knowledge.  I was 16 years old when I finished secondary school.  By 2009, I had my diploma from University with studies in Arabic and Literature. This is when I started sharing my knowledge with tourists.  I wanted everyone to know and experience the Morocco I call home and that I love.  I wanted to share the different cultures of the Berbers in the mountains those in the desert and even those in and the cities.

The Berbers are the original people of North Africa.  Their land was from the SIWA oasis in Egypt and included Morocco, Algeria, Libya, Tunisia, Mali, Canary Islands, Chad and Niger. The 12th Century Berber were a very noble and free people living together long before the Arabs.  Their leader was Queen Dahia.  Berbers were a mix of Christians, Jews and non-believers who lived in peace with each other with respect for their differences.  Their belief was that religion was vertical and horizontal.  Vertical was direct to God.  The horizontal aspect is person to person.

When the Arabs arrived in the 12th century, they tried to destroy all religions of the Berbers   They left after six years when they had no success in doing so but returned and were more successful the second time after offering false promises.

Mohamed Amraoui is a Berber nomad, born and raised in the desert of Morocco.  He loves the desert and loves his country and wants the world to know Morocco as he does.  He wants everyone to see the many faces of Morocco as well as the varied cultures.  Just a couple of days with Mohamed and you will know that you will come again to his fabulous country.

For more information about the Berbers go here