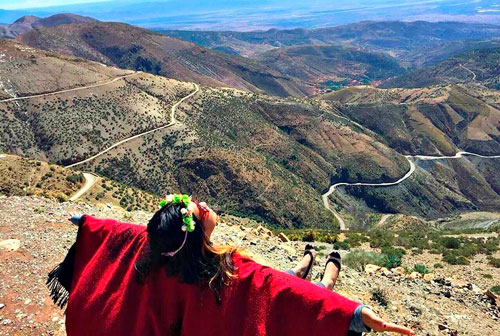 Tangier  is a major city in northwestern Morocco. It is located on the Maghreb coast at the western entrance to the Strait of Gibraltar, where the Mediterranean Sea meets the Atlantic Ocean off Cape Spartel. The town is the capital of the Tanger-Tetouan-Al Hoceima region, as well as the Tangier-Assilah prefecture of Morocco.

Many civilisations and cultures have impacted the history of Tangier starting from before the 5th century BC. Between the period of being a strategic Berber town and then a Phoenician trading centre to the independence era around the 1950s, Tangier was a nexus for many cultures. In 1923, it was considered as having international status by foreign colonial powers, and became a destination for many European and American diplomats, spies, writers and businessmen.

The city’s name is said to come from Tingis, the daughter of Atlas, the mythical supporter of the Heavens. However, it more likely derives from the Semitic word tigisis, meaning “harbour”. Tangier is also referred to as Boughaz or nicknamed as “the bride of the north” by the Moroccans and “the door of Africa” for its particular location in the peak of the continent.

Tangier was founded in the early 5th century BC by Carthaginian colonists, who were probably the first ones to settle around the coast.

The Greeks ascribed the city’s establishment to the giant Antaios, whose tomb and skeleton are pointed out in the vicinity, calling Syphax the son of Hercules by the widow of Antaeus. The caves of Hercules, a few kilometres from the city, are a major tourist attraction. It is believed that Hercules slept there before attempting one of his twelve labours.

The commercial town of Tingi (Τιγγίς in Ancient Greek) came under Roman rule during the 2nd century BC (146 BC). It was initially autonomous, and then, under Augustus, became a colony (Colonia Julia, under Claudius) and capital of Mauritania Tingitana of Hispania (since 38 BC). It was the scene of the martyrdoms of Saint Marcellus of Tangier. Tingis was the main Roman city of Mauretania Tingitana in the 4th century and enjoyed huge development and importance. In the 5th century, Vandals conquered and occupied “Tingi” and from here swept across the Maghreb.

A century later (between 534 and 682), Tangier fell to the Byzantine Empire, before coming under the control of the Umayyad Caliphate in 702. Due to its Christian past, it is still a titular see of the Roman Catholic Church.

When the Portuguese, driven in good part by religious fervour, started their colonial expansion by taking Ceuta in 1415, Tangier was always a primary goal. They failed to capture the city in 1437 but finally occupied it in 1471 (see List of colonial heads of Tangier). A partial plan of the original kasbah (Arabic: القصبة al-qaṣbah) was found in 2009–12, in a Portuguese document now preserved in the Military Archives of Sweden in Stockholm (Krigsarkivet/Riksarkivet).

The Portuguese rule lasted until 1662, when it was given to England’s King Charles II as part of the dowry from the Portuguese Infanta Catherine of Braganza, becoming English Tangier. The English gave the city a garrison and a charter which made it equal to English towns. The English planned to improve the harbour by building a mole. With an improved harbour the town would have played the same role that Gibraltar later played in British naval strategy. The mole cost £340,000 and reached 1,436 feet (438 m) long, before being blown up during the evacuation.

An attempt of Sultan Moulay Ismail of Morocco to seize the town in 1679 was unsuccessful; but a crippling blockade by his Jaysh al-Rifi ultimately forced the English to withdraw. The English destroyed the town and its port facilities prior to their departure in 1684. Under Moulay Ismail the city was reconstructed to some extent, but it gradually declined until, by 1810, the population was no more than 5,000.

The United States dedicated its first consulate in Tangier during the George Washington administration. In 1821, the Legation Building in Tangier became the first piece of property acquired abroad by the U.S. government—a gift to the U.S. from Sultan Moulay Suliman. In 1828, Great Britain blockaded the port in retaliation for piracy. It was bombarded by the French Prince of Joinville in 1844.

Italian revolutionary hero Giuseppe Garibaldi lived in exile at Tangier in late 1849 and the first half of 1850, following the fall of the revolutionary Roman Republic.

Tangier’s geographic location made it a centre for European diplomatic and commercial rivalry in Morocco in the late 19th and early 20th centuries. By the opening of the 20th century, it had a population of about 40,000, including 20,000 Muslims, 10,000 Jews and 9,000 Europeans (of whom 7,500 were Spanish). The city was increasingly coming under French influence, and it was here in 1905 that Kaiser Wilhelm II triggered an international crisis that almost led to war between his country and France by pronouncing himself in favour of Morocco’s continued independence, with an eye to its future acquisition by the German Empire.

In 1912, Morocco was effectively partitioned between France and Spain, the latter occupying the country’s far north and far south, while France declared a protectorate over the remainder. The last Sultan of independent Morocco, Moulay Hafid, was exiled to the Sultanate Palace in the Tangier Kasbah after his forced abdication in favour of his brother Moulay Yusef.