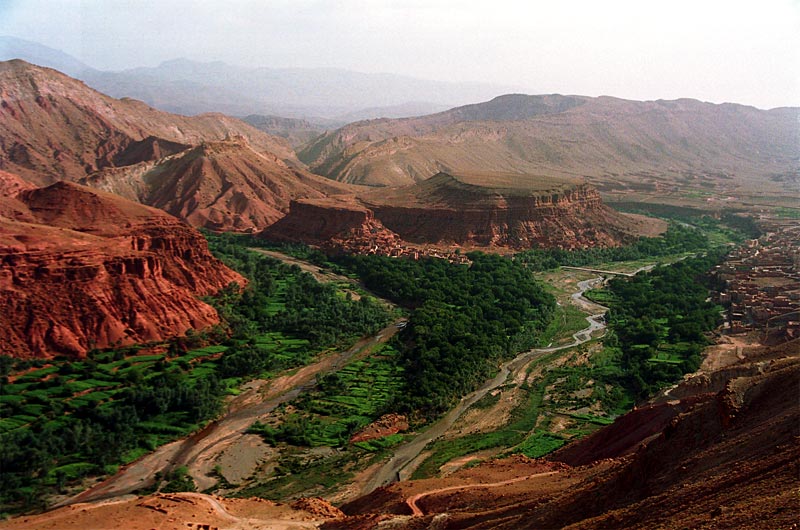 Qalaat MGouna ( is a city in Tinghir Province, Dra-Tafilalt, Morocco. According to the 2004 census it has a population of 14,190. This town constitutes an economic and social center for the region, for its very animated nature. Kalaat M’gouna is most known for the “Festival des Roses”; a festival that takes place on the city every year in May.

In this city, there are two major days of souk (market): Tuesday, only for livestock trade, and Wednesday for food and other goods.

The high schools Al Woroud (Roses), which derives its name from the roses of the Valley of Dades and M’goun, and another high school named My Baamrane, are downtown.

There is a factory for the distillery of roses, and production of rose water (l’eau de rose) and essential oils, and cosmetic products. One example of distillation units of roses in Kelaat M’gouna is named sté Florose.

The city is also known for its dancers who perform a dance called “Ahidouss”, and its beautiful roses, hence its second name “The valley of the roses.”

The Roses Festival takes place in Kelaat M’gouna every year in May. It lasts 7 days to celebrate the season of roses in Dadès and M’Goun. In 2015, the number of visitors of the festival reached 300,000. During the festival, people from all over the country and the world come to qalaat Mgouna to discover its beauty, and for its rose products that range from perfume, rose water, oil, to cosmetic products, and to experience the warmth and welcome of its generous people.

The festival is also an opportunity for the visitors to explore its fair of handicrafts and the agricultural products of the region.